This teaching module examines the case of the Basmachi movement as Islamic insurgency and identity-based conflict, and its containment by the government in Central Asia in the 1920s. Using the primary source materials from the RPI collection, students will learn:

Included is a description of theoretical concepts, case analysis, and bibliograhy. 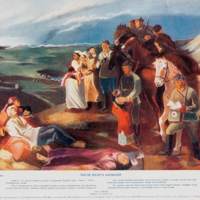 This teaching module examines the dynamics of identity-based conflict as presented in the following 4-C model (Comparison, Competition, Confrontation, and...