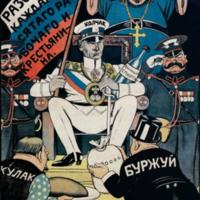 Visual propaganda played an enormous role in the history of the 20th century. In contrast to the 19th century, it...