In this undated OGPU report (probably from 1927) the agents express their fears that the Ufa Central Spiritual Administration (Tsentral’noe Dukhovnoe Upravlenie) was extending its influence into Kyrgyz and Turkmen areas.  Tatar imams organized spiritual administrations in the area.  The Ufa administration is accused of “organizing group religious instruction,” among other things.  The Ufa administration had not been as successful in the Turkmen SSR.  Nonetheless, the OGPU felt that conditions in the republic were favorable for it.  The report describes Turkmen clergy as “feudal-clan bosses,” who wielded influence over the mosque-based clergy and Communist Party officials.  The proof was that four ishans in Merv Okrug had come out of the land reform campaign with more land than they had held before it started.  The report should be interpreted more as an expression of OGPU paranoia than of the actual reach of the Ufa Spiritual Administration 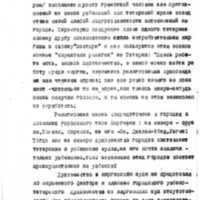 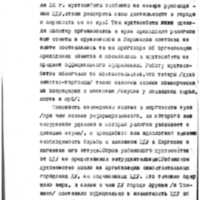 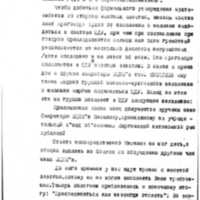 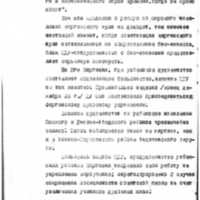 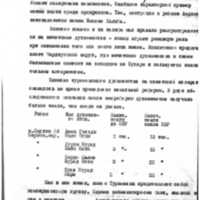 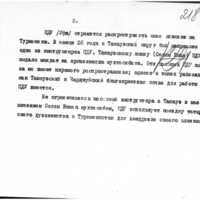 Strictly speaking, there is essentially no Kirgiz clergy, since Islam has not penetrated Kirgiz settlements as strongly as among the Uzbeks. Wherever there is a mosque in a settlement (not a frequent occurrence) the duties of an imam, mostly on big religious holidays (Ramadan, Kurban Bayrami), are performed simply by a literate person or an Uzbek or Tatar mullah who has been has been invited for the season and has been forced out of the cities due to his poor training. The following remark by a Tatar to his friend is typical, showing how undemanding the Kirgiz are toward their “pastor” and how all kinds of “clerics” from Tataria take advantage of this: “There is work here, in the spring it is carpentry, and in the winter one can find work among the Kirgiz by conducting religious sermons or reading the Koran; they don’t understand anything anyway – whether you are reading them the Koran or perform some song with a singing voice, and you can make an excellent living this way.”

The clergy was not a serious factor in Kirgiz settlements, and the urban Uzbek-Tatar clergy had no influence on Kirgiz settlements. This insulation of the towns from the settlements existed all the way up to 1924-25. Since then, the situation has been changing. During this period, the Ufa CRB [Central Religious Board] has expanded its sphere of influence beyond the internal oblasts and republics of the Union and has set up muhtasibats (supervisory boards) in Kirgiz towns. Not only religious persons got into the muhtasibats; secular people did as well, mostly prominent

members of the Tatar bourgeoisie (in Frunze, Paimatov; in Karakol, Tadzhitdinov). The CRB is sending its muhtasibats instructions on organizing religious-doctrine groups, seeking to implement as quickly as possible the decree of the All-Russia CEC on religious doctrine, as well as religious calendars and ledgers for recording births, deaths and marriages (whereas such a system did not previously exist in Kirgizia). At the beginning of 1926 the muhtasibats, especially those managed by the CRB in the north, began to expand their activities in the towns and to extend them to the settlements. For example, the muhtasibats attempted to set up parish religious councils in the settlements in the Frunze and Naryn cantons; the same type of resolutions were drawn up locally on setting up parish councils and they were sent to the muhtasibats to be officially registered. The work of the muhtasibats was made easier by the fact that the Tatars (clergy and merchants) were closely tied by their commercial transactions to the manaps [local chieftains] (purchases from the latter of raw materials, livestock, etc.).

The danger of the implantation of Islam in Kirgiz settlements (i.e. reformed Islam, from which all the nonsense has been removed and which links religion to science) by an ideology inimical to us stems from the necessity of combating the influence of the CRB in Kirgizia and driving it away. Separating the Uzbek clergy from the CRB did not seem difficult. The Uzbek clergy set out to set up autonomous urban religious boards that were not subordinate to the CRB. This trend carried the day, and as a result the Religious Board of the city of Frunze (and Tokmak) officially informed the CRB of Kirgizia’s separation and protested the CRB’s supervision. The autonomy movement, however, ran into opposition from the majority of the Tatar clergy and the Tatar bourgeoisie.

When a number of actions succeeded in breaking the open resistance by local Tatars, the CRB began to act directly: at the end of 1926

it issued mandates to manaps and persons associated with them to occupy the positions of muhtasibs [Sharia supervisors]. The mandates went to the following manaps:

To secure formal approval of the muhtasibats from local authorities, the manaps draw up resolutions, ostensibly from the populace, asking to become part of the CRB. When drawing up the resolutions, fingers are used to make imprints or a literate person signs for several dozen illiterate ones (although the later do not know about this). These resolutions are sent to the CRB and the local authorities. In connection with the visit to Frunze by Cde. KISELEV, secretary of the All-Russia CEC, a group of manap-muhtasibs submitted a request to him as well regarding the desire of the Kirgiz to come under authority of the CRB. Immediately afterward the same group sent the CRB the following statement:

We have delivered the attached copies of all documents to Kiselev, Secretary of the All-Russia CEC, who came to the constituent congress of the proclamation of the Kirgiz Autonomous Republic.

Kiselev could not give an immediate response, but promised to send one from Moscow after a discussion with other members of the All-Russia CEC.

We are still having tensions with the local government, so we could not fulfill your demands. Now we think we are close to a final outcome: “Join us or drop away for good.” In any case, in spiritual and material terms we promise to be sincere and fruitful functionaries in carrying out the tasks that you have assigned. We therefore earnestly request your assistance with the All-Russia CEC in granting our petition.

shows how quickly the temporizing tactics of the Progressists at the CRB are being adopted in Kirgizia: “When the congress is held, it must be remembered, as the Book of Traditions says, that any religious congress must meet the requirements of the social and economic system of the times when it takes place.”

In southern Kirgizia, where the Uzbek clergy constitutes the vast majority, the influence of the CRB is not so noticeable. Relatively recently (the end of December 1926), the Osh Religious Board resolved to join the Fergana Religious Board.

The clergy has an extremely powerful influence on the Uzbek population of Osh and Dzhalal-Abad raions. The same situation exists here as in Assakе-Sharikhan Raion, Andizhan Okrug.

Making use of the CRB’s experience, the Muslim clergy of the Uzbek raions of Kirgizia is directing its work at strengthening religious doctrine; two cases have been reported in which attendance at Soviet schools has dropped because of an increase in pupils at religious schools.

B. THE CLERGY IN TURKMENISTAN

What is distinctive about the Turkmen clergy in most of Turkmenia’s raions is that it is mixed with the feudal-tribal elite. It is sometimes impossible to draw a sharp boundary between a Turkmen ishan [Muslim religious leader] and the main feudal-tribal group. The most typical example can be found among the Ersari. For example, the émigrés in the area of Andkhoy are headed by someone called Ishan Khalifa.

The Turkmen clergy’s influence on the Soviet administration was manifested during the land reform. In a number of the villages inspected, following the land reform the clergy received more land than it had before.

Like all ishans, the ishans of Turkmenia are a conservative group. There was an interesting occurrence in a village in Askhabad Okrug, however, where two prominent clerics campaigned for carrying out a land reform. And since the land reform turned out relatively well in that area, the clerics became extremely popular.

The CRB (Ufa) is seeking to extend its influence to Turkmenia. At the end of 1926, a CRB instructor was sent to Tashauz Okrug. The CRB issued a mandate to the Ishan of Tashauz (Selim Ishan) to set up a muhtasibat. These attempts by the CRB are not yet widespread; in such raions as Tashauz and Chardzhou, however, there is a propitious foundation for the CRB to work.

The CRB, not confining itself to sending an instructor to Tashauz and appointing Selim Ishan as muhtasib, is also making use of the trip by the Tatar clergy to Turkmenistan to impose its influence.