The Soviet definition of nations required that a clearly-defined people should live in a clearly-defined territory. Unfortunately, the different ethnic populations of Central Asia lived inter-mixed with each other. In the northern part of today’s Uzbekistan Uzbeks, Kazakhs, and Tajiks had lived together for centuries. The act of creating an Uzbek-majority republic in this territory would strand a large community of Kazakhs, who would suddenly find themselves a minority in a land they considered theirs. In this personal note dated August 25, 1924 from O. Ia. Karklin, deputy chair of the Central Asian Bureau of the Central Committee of the All-Russian Communist party(bolshevik), reports that the 270,000 “Kirgiz” (Kazakhs) of the Bukharan Soviet Peoples Republic are demanding their own autonomous area within the new Uzbek Soviet Socialist Republic. He recommends studying the issue. 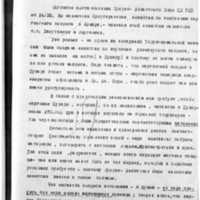