Abdurahim Khodzhibaev (1900-1938) was the first Chairman of the Council of Ministers of the Tajik SSR. An early member of the Communist Party in Khujand, he rose to prominence in the 1930s before falling victim to the Great Terror. This memoir was written by his daughter, Baroat Khodzhibaeva.
Date: 2000 Source: B.A. Khodzhibaeva. Abdurakhim Khodzhibaev: stranitsy korotkoi zhizny (Khujand, 2000). 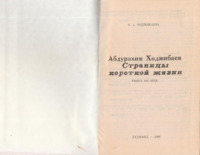 Muhammad Osimi (Osimov) 1920-1996, was a Tajik philosopher, educator, and government official. Born in Khujand, he was a graduate of the State University of Uzbekistan in Tashkent and saw service in Leningrad during the Great Patriotic War. He was the first rector of the Polytechnic Institute in Stalinabad (Dushanbe), and also served as Minister of Education. This selection is from a volume published on the 85th anniversary of his birth, but the scan only includes Osimi's own recollections about Sadriddin Ayni.
Date: 2005 Source: Salimov, N.Iu. Yodnomai ustod Osimi. Khujand: Nuri ma''rifat, 2005.

О прошлом с гордостью, о будущем с оптимизмом With pride about the past and optimism about the future.

Rashid Karimov (1932-) is a Tajik economist who spent 30 years as the head of the Institute of Economics of the Tajik SSR Academy of Sciences in Dushanbe. He played a leading role in the key economic debates of that period, as well as in organizing the research behind policy proposals adopted at the state level. This memoir covers his childhood outside of Leninobod (Khujand), his education in the post-war years, eventual graduate work in Moscow, and time in the institute. It also recounts stories about his family, including his sister I. R. Rakhimova, a leading party official.
Date: 1997 Source: Rakhimov, R. K. O proshlom s gordost'iu, o budushchem s optimizmom Dushanbe: NPITsenter, 1997.