This project aims to significantly widen the spectrum of Central Asian voices in the historiography of Soviet Central Asia.  While Central Asian politicians, writers, intellectuals, and even workers have written numerous memoirs spanning the post-war period, the majority are frequently overlooked and infrequently cited.  They are not systematically categorized, catalogued, or made available in even regional libraries. Often self-published and self-financed, they are most frequently available only from the authors themselves or at local bookshops.  As a result, most researchers gain access to a limited and essentially random collection of memoirs from the region, rather than the true breadth of its many voices.

By collecting and digitizing this body of memoirs, this project makes these unique sources available to historiographical enquiry in a systematic and more complete fashion.  At the moment, the site mostly hosts memoirs from the post-war period in Tajikistan.  These memoirs include those of public officials and intellectuals, as well as engineers and social scientists.  The majority was published in very small print runs of 100-500 and has been largely absent from library collections.  Printed for the most part in Dushanbe, the capital of Tajikistan, the memoirs are written in Russian and Tajik, including a small number in the Persian script.

These memoirs provide an important perspective on many aspects of life in Soviet and post-Soviet Tajikistan, from the institutions in which individuals worked, to the relationship between Moscow and Dushanbe, to the changing atmosphere of perestroika in the 1980s and the Civil War of the 1990s.  Some memoirs take a broad view of Tajikistan, describing major events and political changes, while others are essentially collections of anecdotes about a famous person and his or her works.  Both perspectives are very important for going beyond the normal source base of archives, macroeconomic statistics, and other faceless and voiceless documents on which historians are forced to rely: they provide the lived experience of history, both big and small.  Gossip is also a centrally important aspect of daily life, and can often be used to track relationships and informal networks. Together, these memoirs are invaluable as a guide to the networks of Soviet-era political, intellectual, and cultural elites.

It is our hope that these memoirs, in a more accessible and searchable format, may broaden the perspectives available on Central Asia, eventually coming to encompass other parts of the region and other time periods in history.  Although the primary audience we have had in mind for these memoirs has been researchers and students of the region, we also believe that they will be interest to wider swaths of the public, including those from the region, who may want to read first-person accounts of the past.

Teachers interested in using these memoirs in their classes are encouraged to consult the translated excerpts from this collection.

How to navigate: to view the memoirs in this collection, please click on the link in the right-hand sidebar or here.  This will take you to a full listing of the memoirs, which you can sort by title, author, or date of publication. By selecting a memoir from the list, you will be able to read more information about the memoir: you will find a blurb about the book in its original language, copied from the book itself, as well as a more general summary of the book in English. For each memoir, you can also download a searchable PDF or read the memoir’s online transcript. You can also use the site’s advanced search function to search through the transcriptions and other metadata by selecting the “Search by Collection” option.  Alternatively, you can also peruse a full alphabetical bibliography of the collection's memoirs, which includes links to the memoir PDFs.


Upcoming steps: the current site provides access to a large number of memoirs in their original languages, but with time we hope to expand the available resources and documents.  In the coming months, we plan to digitize and upload further memoirs, develop teaching resources, including interactive timelines and course syllabi, and translate excerpts from a number of existing memoirs.  If you would like to be involved in any of these initiatives, or have suggestions for any additional expansions, please do get in touch.

Contributing to this project: This project currently holds approximately 70 memoirs of authors from what is now Tajikistan (as well as a few from Uzbekistan), covering the Soviet and post-Soviet periods.  Our hope is that with time, the project will grow to contain a wide variety of written documents from modern Central Asia: memoirs, personal documents and written paraphernalia that will shed light on the region’s history in a depth otherwise unavailable.  We also hope that the geographical and temporal bounds of the project will expand to other Central Asian countries and to earlier time periods as well, such as the 19th century.  As more memoirs become available, we hope to add to and broaden the collection.

If you are in possession of (or are the author of!) a document that you feel would fit as part of this project, we would be very glad to hear from you and to discuss the possibility of adding this document to the online database.

This project was also made possible through the organizational and financial support provided by the Central Asian Program at George Washington University.

Note on copyright: The memoirs collected and digitized in this online database were, for the most part, self-published or published in very small print runs; all are in practice out of print. We have done our best to contact copyright holders to receive explicit permission for the memoirs to be digitized and uploaded online. At the same time, if you are the author, publisher, or legal inheritor of copyright of one of the memoirs or other documents uploaded in this collection and feel that the copyright of this work has not been handled appropriately, please do not hesitate to write us to express your concerns. 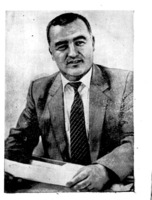 View the items in Central Asian Memoirs of the Soviet Era